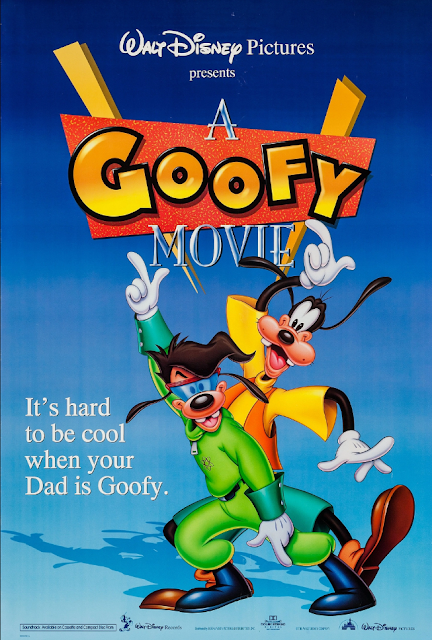 This is the only modern Disney animated feature to include the classic roll call. In fact, there had not been a film with these characters since the regrettable Fun and Fancy Free in 1948, forty-eight years before.

Essentially a spinoff/sequel to the sitcomish Goof Troop, the film isn't really about Goofy but his son Max, who is all things teenager: bratty, selfish, unwise, stupid, and horny. He tells the love of his dreams Roxanne that Goofy (his father) is friends with  Powerline, a popstar. He told her this to try and impress her because he is unable to take her to watch a Powerline concert at a friends' house. Goofy, meanwhile, becomes convinced that Max will become a hoodlum if he doesn't "bond" with him, so he takes him on a fishing trip, which is impending his going to the party. The rest of the movie is the escapadees of a bored teenager and his nerdy, retarded dad.

The movie is actually pretty good, but the plot suffers from a distracting plothole, that the whole story hinges on: Goofy takes Max on this month-long trip the day before the party. It is never said why Max doesn't just ask Goofy to postpone the trip a day or two to go to party. This ruins the believability of the story.

On the subject of realism, this film is barely a cartoon. This is because of a common misconception that people cannot sit through seventy minutes of fallapart bodies and violent gags. The main proponent of this theory is Nine Old Man Ollie Johnston, who says this in interviews and in the first few chapters of The Illusion of Life. But it isn't as if Ollie was followed that well in post-The Little Mermaid Disney filmmaking, so why is this so common? After all, Dumbo has proven that a film could be cartoony, but the catch is this: in an animated film, the characters must be lovable and believable to last seventy minutes. After that, then add all the Kimballisms you want (Ollie did not work on Dumbo, by the way).

Much like other Disney revivals of the time, this feels written rather than drawn, as cartoons are meant to be (AKA storyboard-oriented). Almost all the jokes are verbal, compared to the visual humor of The Three Caballeros and such, rooted in character. But at least its written pretty well. I must say its reliance on grossout for was not pretty.

The animation is fluid, especially Powerline's dancing; he moves like a cross between Bill Tytla and Bobe Cannon. This film has the design flaw of having female characters with-ahem-"realistic" anatomy, which is a little awkward-especially compared to the cameos of Mickey and Donald, unrealistic and pants-less. It's even more weird that everybody is a Goofy anthro, kind of like the characters of Jack Kinney's Tomorrow We Diet, Motor Mania, and Hockey Homicide.

The main plus is mainly the likability of Goofy. Because the character is so familiar with audiences, you actually feel bad for him as he tries to be a good father to his snot-rag son. You know he is really hurting in the scenes when Max refuses to cooperate, which trumps out anything being made at this time in animation. The existence of the characters is especially present in that scene when Max yells at Goofy in the car at Lester's Possum Park. The scene is actually hard to watch. I was literally squirming in my seat.

Anyway, I must say that I was pleased...mostly.