CHUCK AMUCK: THE LIFE AND TIMES OF AN ANIMATED CARTOONIST 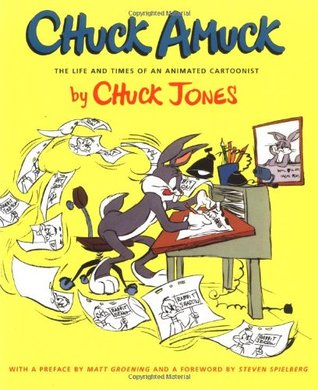 My first cartoon memoir, I chose wisely. This book is truly a monument to animation, and to one of its legends.

Chuck doesn't tell his full life story but rather what parts of it influenced his cartoons, thus avoiding the horror of enduring his political and religious opinions.

It is still mind-boggling the amount of thought Chuck put into the comedy of his films, even to the point of the ways the characters move and walk. It's stunning.

As much as The Illusion of Life is listed as the ultimate book on character animation, this book does the same thing more clearly in less pages and less words. This is not to doubt Frank and Ollie; instead it says tons on Chuck's genius.

Like with most of Chuck's retellings, many of his anecdotes are funny, but probably exaggerated, either a little or completely, like as the numerous Eddie Seltzer stories, and Henry Warner's belief that their studio made Mickey Mouse cartoons. Read with a cautious eye!