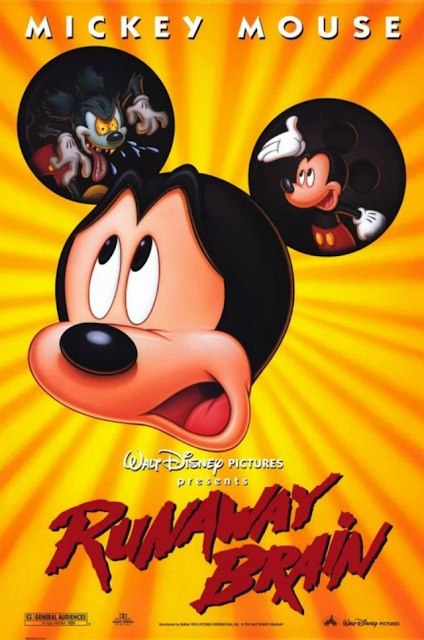 Runaway Brain is a Mickey Mouse short played before A Kid in King Arthur's Court (never heard of it...for good reason) in 1995. It was the first Mickey cartoon since The Simple Things in 1953, a near-half-century gap.

Mickey is too addicted to a Snow White Sega Genesis game to remember his-and-Minnie's anniversary (first date anniversary; sixty-six years after their rocky start in Plane Crazy), so through some complex maneuvering it somehow leads to Minnie thinking that he's taking her on a Hawaii cruise for $999.99. He reads an ad for some "mindless work" for that exact amount (apparently neglecting that was for one person), but its actually for some scary stuff from Dr. Frankenollie [Frank-n-Ollie] (now there's an Illusion of Life). He gets his brain switched with a Karloffian interpretation of Pegleg Pete, and the chaos begins.

I must say I enjoyed myself on this one. The premise is certainly funny, probably the best of the Legacy cartoons. The animation is full and fluid, like all Disney in the Nineties. Unlike the old days, when the films looked better than the shorts (compare Bambi to Mickey's Birthday Party, released in the same year), this looks just as good as Aladdin does, which is the only only improvement over the Golden Age in the modern era. Everybody is in character, with Mickey and Minnie's typical charming personalities.

And this film gives some disturbing implications about their relationship: they were going to share a cruise? Together?

There is a problem, and it is a problem with all modern animation: it feels written. There is no sense that this was drawn, like when you watch a classic cartoon. Just watch The Little Whirlwind or Symphony Hour. They are visual. This just feels like they got some guy to chuck out a seven minute script. But thankfully, it's a good script. This habit of "illustrated radio" continuing intro animation's revival in the Nineties is depressing considering the amount they could spend on animation. It's ironic that animation is now more talky than live-action television. I theorize that people growing up on Yogi Bear and Wacky Races started to pollute the stuff they touched in the Nineties, like how people who grew up on The Simpsons now only make sitcoms with ball-eyed wiseacres.

Overall this flaw is minor compared to the accomplishments in character, humor, and animation.