SEVEN MINUTES: THE LIFE AND DEATH OF THE AMERICAN ANIMATED CARTOON 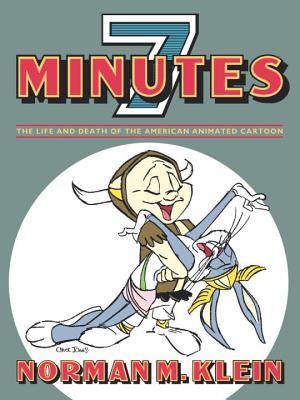 Oh you see I thought I was getting a history of American Animation! This is an analysis book. That is fine...if it were good analysis.

The book is sadly (and badly) written in some weird, artsy-fartsy confusing style, making it virtually unreadable. It was a college textbook or something (my copy has highlighting in the first chapter), so that may be why. If I wanted to read about nouveau and moderne, I would read-well-art books but, alas, I don't. (There's a reason I don't watch UPA often.) I do think surrealism was more a factor (unintentionally) in American Animation than was any other art form (even though abstraction played some in the most Kimballian of Disney stuff). In many ways cartoons achieved the Dali form of entertainment, especially in Fleischer cartoons and in the early Lantz Oswalds (which I talked about here). This would've been a perfect thing to point out in his book, but Dr. Klein does not do so.

Watch out casuals and mainstreams, because this book is chockfull of errors related to the content of the cartoons. I don't think it amounts to a guy not knowing anything about the shorts (because anyone who can get interpretations like those out of them would have to), but he seems to be describing their scenes from memory. For example, he describes the hip girl feline from The Zoot Cat as being a "black cat". I have no idea if he means this racially or he literally means a black cat, as on your Halloween decorations. This was in the chapter called Coal Black and De Sebben Dwarves, about wartime cartoons, so we'll never know. He describes a scene in Wild and Woolfy that literally doesn't exist; he says that the part where Red beats up Wolf when he kidnaps her is just like in The Dover Boys, when Dora Standpipe goes all out on Dan Backslide. It isn't a gag like in The Dover Boys because The Dover Boys is the only cartoon with that gag! And in context it makes more sense in The Dover Boys because that film is a parody of adventure stories, so the useless damsel-in-distress beating the living crap out of the villain is supposed to be sour satire. Wild and Woolfy is only an accurate parody of generic westerns, with shoot-happy loonies. With all these errors one wonders if the whole book is a scam but from what I can tell the facts behind the camera are accurate.

There are some typos too, like Hugh "Harmon" and "Scoobee-Doo" (don't ask). The absolute funniest is John "Kricfelusi".

The good thing about this tome is that the analysis is in some cases probably true. The Fleischers representing "New Humor" (the Marx Brothers' way) is right (even though Tex was more into that), as is his dumbing down (in a good way) of all cartoons into a power struggle called "The Chase". But sadly, he beats this Chase thing into the ground by saying it over and over and over again. The aforementioned chapter on wartime cartoons is very good. Strangely, Bob Clampett isn't talked about a lot. But I must say the author reeeeeeeeally likes Fleischer cartoons.

Also this book is valuable for having interviews he conducted with Chuck Jones (who did some of the drawings in the book), Friz Freleng (who finally gets some attention in this book since most histories ignore him), Art Babbitt, Ward Kimball, and Joe Barbara, among others, which you won't find anywhere else.

But unless you're a Golden Age fanatic, this book is not for you.