TEX AVERY: KING OF CARTOONS-THE MAN WHO CREATED BUGS BUNNY, AND THE STORY BEHIND THOSE LUNATIC LOONEY TUNES 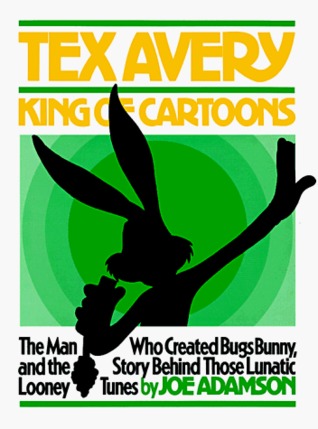 An excellent book, Joe Adamson covers the whole life of Tex Avery, my favorite animation director, and has lots of other cool stuff in it too.

The book's first part is an overall history of American Animation up to Tex Avery's arrival. Other than Joe's witty and wry commentary this is especially cool because when this book was first published (1975) there were no animation histories, whereas nowadays we're spoiled by Of Mice and Magic and Hollywood Cartoons and Before Mickey and so on (even though a huge complete guide to them all has yet to have been written). The second and third parts are a bio of Tex's life (mostly his career than background). The emphasis is appropriately on his masterful and hysterical MGM films rather than his laborious Warner Bros. work. The rest are semilong interviews with Michael Maltese and Tex, Heck Allen, and just The King himself. Finally a complete filmography of Tex's films, with reviews and supershort summaries. The book has large black-and-white illustrations, most of them the most beautiful of Tex's takes and scenes.

I could try to find something wrong with the book, but there really isn't anything. I guess I would've liked more about Tex's early and personal life. There wasn't much on his Lantz films, and even though he did only four The Legend of Rock-A-Bye Point and The Crazy-Mixed-Up Pup are masterpieces on a par with his MGMs, as well as the other two.

Thankfully, this book avoids most of the pratfalls of books on animated comedy that put down Disney (such as Jerry Beck's). Adamson praises Disney as something different from Tex and Chuck and Friz's way rather than superior or, in Beck's case, inferior.

But other than these small nitpicks the book is perfect in every single way. I can't recommend it enough for not just for the radical Texophiles like myself but American Animation fans all over.