THAT'S ALL FOLKS!: THE ART OF WARNER BROS. ANIMATION 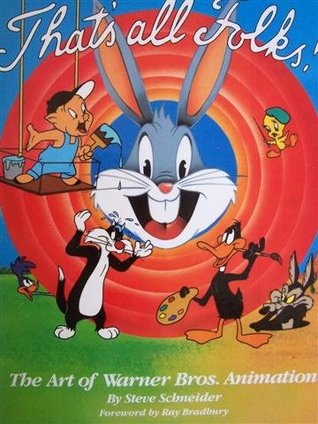 Basically Warners' equivalent of The Illusion of Life, except not written by a big insider (Chuck, an author himself, would've been nice), but by animation lover Steve Schneider.

The book is mainly a history of the studio from Harman-Ising to the closing in 1964. After that is a breakdown of all the characters, and then a complete filmography excluding (rightfully) the DePatie-Freleng and Bill Hendricks post-mortem blots.

First off the pictures are great. Not as beautiful as the ones in Warner Bros. Animation Art (this book is actually that one in fact), but lots of fun.

The main problem with the book is the text. Steve most obviously favors Bob Clampett over every other director, spending long paragraphs blathering about his so-called "genius". Bob was a great director but was hardly a genius or super original. In fact the opposite was true: Bob steals heavily from Tex Avery in structure and in gags. Notice how no one has ever said Bob's work was funny. It's that his cartoons are this-way-animated and that-way-nice-looking. What's funny about them is their freneticness and violence, rather than gags. In fact, his gags are downright poor, such as the numerous-again-steals from Tex, such as "Isn't it?" remarks and big signs announcing something. But this Schneider guy says barely a thing about Tex but a lot about Mr. Bugs-Bunny-Creator, So-Called!

Sadly, in replacement for Bob-discussing there is virtually nothing in the book on Friz, despite saying that he is the Warner Bros. cartoon studio. Friz is absolutely underrated as a director, and Steve does nothing to help this unfortunate situation.

What time he spends on Chuck are good, though. Talking at length about Chuck makes more since than about Clampett, since the most famous Warner cartoons were his.

There is also plenty of Disney bashing. This is ironic, because Bob exemplifies Disney principles more than any other Warner director (Coal Black and the Sebben Dwarfs and Tin Pan Alley Cats' filmic aspects are some good proofs). A Corny Concerto was a parody of Fantasia, but What's Opera, Doc? was not, especially not from a guy who, like Bob, admired the Disney work.

I was disappointed, but for information and eye candy, go put it on the bookcase.