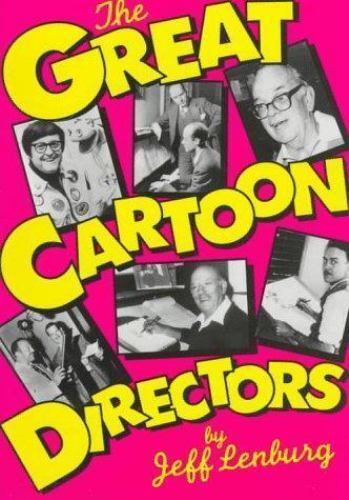 A special thanks to Paul Groh, for suggesting this book.

A decent book, it is mainly important in that the author interviewed the living directors for it, making it an essential part of any GAC fan's collection.

The book covers Friz Freleng, Ub Iwerks, Chuck Jones, Bill Hanna and Joe Barbara, Bob Clampett, Tex Avery, Walt Lantz and Dave Fleischer, in that order. Again, Friz, Chuck, Bill, Joe, Bob and Walt all contributed interviews to the author, given an exclusive inside look into their lives. In a special case, this book is the only book for biographical information on Friz and Bob (the former being a yearlong hunt for me). The text is readable and occasionally funny, and you get the feeling that Jeff loves all cartoons, rather than the partisanship of types like John Culhane (toward Disney) and Steve Schneider (toward Warner Bros.). There are filmographies for each director, too.

The book has a big flaw, though: lots of errors. A few: he says that Rhapsody in Rivets was in conflict with The Cat Concerto for the 1946 Academy Award rather than Rhapsody Rabbit (Rivets was released in 1941). He refers to Hugh Harman as the director of The Milky Way instead of Rudy Ising. He calls Tex's Southern Wolf "Billy Boy", which was the name of the goat and cartoon the wolf was in, but not him. He says that Chuck directed Dog Gone Modern before The Night Watchman, his first cartoon. He claims that Fitz and Bimbo are the same character, but in his defense that's probably an accurate observation (the Betty Boop Wiki says "Fitz the dog is a complete different character to Bimbo and only served as base to recreate Bimbo into the musical singing dog.") There were others, but I can't remember, and won't bother looking through the book for them just to be negative.

It's strange that none of his editors factchecked these. But the errors can be forgiven in that how little GAC info there was out there in 1982 (Of Mice and Magic, Tex Avery: King of Cartoons, The Fleischer Story and Before Mickey, that last one not very helpful with focus). It was probably even harder to watch the films. The filmographies are correct, though, despite some of the errors regarding it.

I was happy to see Friz finally get the attention he deserves. Bob's chapter was especially informative, including all sorts of anecdotes of he many projects with puppetry and stop-motion, as well as his ill-fated John Carter cartoon. Ub, Walt, and Dave being included in the book seems more ceremonial then for their actual directing abilities. Ub was not much a director and more an excellent animator and draftsman; Walt was a producer and not behind much of the humor or timing in his cartoons; and Dave was a "creative producer"-Fleischer cartoons were not directed per se. In place of Walt I would've put Shamus Culhane, if somebody Lantz had to be included. Frank Tashlin's total absence is odd, to say in the least.

Overall, despite some peculiarities, the book is rip-roaring, nonstop fun, writing in the spirit of total love for old cartoons, making it worth everybody's time, especially for the new info.