THE ILLUSION OF LIFE: DISNEY ANIMATION 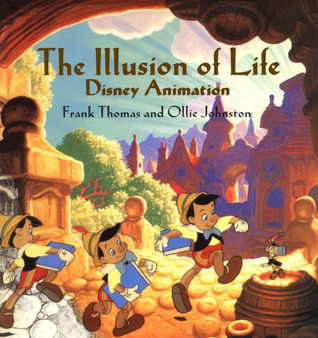 One of the essential animation books of all time. Written by two of the Nine Old Men, it is an epic look into Disney storytelling from The Three Little Pigs to The Fox and the Hound (essentially the classic age), mainly in tribute to character animation.

It includes little anecdotes, two chapters on "the big four" ("Fergy" and Ham Luske; Fred Moore and Bill Tytla), advice for animators, breakdowns of the creative process, and cool appendices of how to draw and animate from Tytla, Moore, Fergy, and a new one (presumably) from than-living Art Babbitt. There are illustrations a-plenty, but the text is still long, and not just a coffeetable with tons of pictures and two-page writing.

Their advice chapter, "The Principles of Animation", is helpful like nothing else I've read, even Preston Blair's book. Even if you're not an animator (I'm not; I'm an amatuer cartoonist), they give some fantastic pointers. For starters they say that appealing design does better than "shock value", which made me think of a certain animator who has made a career of of this. They also talk about "unnecessary dialogue", which makes me think of the illustrated radio-for-cartoons we have today plaguing the lineup on Fox, TBS, and Comedy Central.

The pictures are gorgeous, as well as the animation flipbooks, which include such highlights as Tytla's Stromboli screaming "QUIET!!!", Kimball's Jiminy Cricket late for school, Babbitt's Abner Countrymouse collapsing, and way more.

Speaking of Tytla, I sniffed some jealously in the book: for absolutely no reason they share a story about Bill being wrong about the way Doc should move. What's the point here?

Thankfully, Frank and Ollie don't spend the whole thing crapping on other studios, as books by Warner fans happen to do.

Since the book's focus is character animation, the only thing they criticize is Ub Iwerks' animation of the early days. Not only is this a discredit to his genius, but they seem to be missing the charm films like Steamboat Willie and The Barn Dance have (even though Mickey is wildly out of character). The reason they put them down so much may be because they didn't work on them. Can anybody really say this doesn't have charisma?: 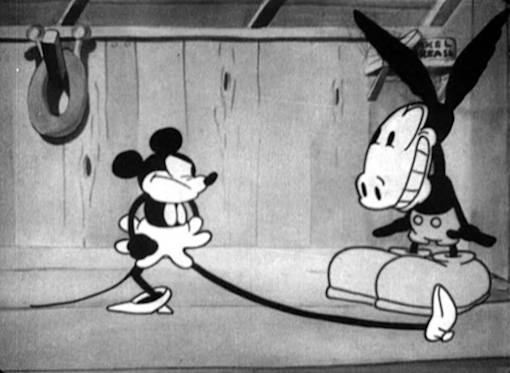 The other (light) criticism they have is for the Xerox process, which is at least a step up, and they rightfully say that the only time it looked okay was in the masterful The Rescuers.

But overall a beautiful book, essentially for all animationophiles.