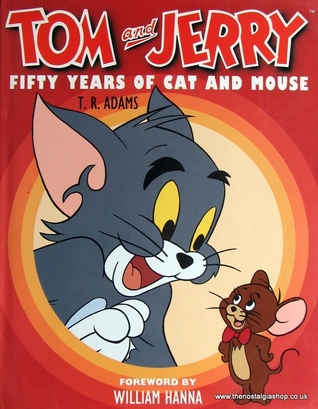 What a letdown! I had my hopes high after Joe Adamson's excellent Bugs Bunny book, and Jerry Beck's pretty good Tweety and Sylvester book, and so I thought a fifty year for Tom & Jerry would be great! This one did not live up to my expectations. It was about as close to them as Tom to catching Jerry.

First piece of confusion: only Bill Hanna wrote the forward. Why no Joe? Joe was alive, and in fact was interviewed for this tome. If Chuck and Friz wrote the Bugs Bunny one, what happened here? Bugs would be there without Chuck or Friz (as Godless an Earth that would be), but there is never a Tom & Jerry without both Bill and Joe.

To the real problems, the text was subpar at best. There was no real talk about the animators, or even the makings of the films themselves. First up are basic bios of Bill and Joe, then a treatise on how cartoons are made, then-the worst part of all-summaries of the seven Oscar winners (as if the readers hadn't watched Mouse Trouble, Yankee Doodle Mouse, and The Two Mouseketeers six trillion times before), a merchadising plug, and then a summary of every one they were in, which can't redeem the sad content of the last few things. Where were the stories of Ken Muse? Dick Bickenbach? Heck, Tex Avery (who was influential on the series)? Not here.

The pictures are even more dismal, if you can believe that. About ninety percent are from the Filmation series (!), rather than the real cartoons. And there are a plethora of Chuck Tom & Jerry images too!

The only ray of hope here is there is actual new information in it, in the form of "primary sources" Bill, Joe, and Irv Spence themselves (the last drew little scrawny pictures of Tom & Jerry just for it). Why no Jack Zander is odd.

In short, a big disappointment.